Visiting your aging parents for the holidays can elicit many intense feelings, made all the more difficult if you notice changes in your parents that you aren’t sure what to do about. If you live a distance from your aging parents, the holidays may be the first time you’ve had the opportunity to recently assess your parents and their health. Really take the time to look at your parents with fresh eyes and observe if anything about them seems downright different. Really ask about how they are doing, and observe if they seem mentally and physically healthy to you.
Listen carefully during your conversations for signs of things they may be struggling with at home. While this is a time for joy and celebration, you can make note of things to discuss with them later. Below is a list of things to look for:
• If a loved one has had obvious weight loss or gain, they may have a medical condition that needs to be addressed.
• Changes in physical grooming habits, such as unkempt hair, dirty clothes, or body odor could be a sign of physical ailment or memory loss.
• A quick glance at a stack of mail can produce some telling clues. For example, unopened bills can be a sign of financial trouble or memory loss, as can statements of overdue balances. If you see an unusual amount of solicitations or thank you letters from charities, you might want to discuss with your parents how much they are donating, how often, and if it is financially prudent for them. Unfortunately, there are fake charities that target senior citizens with financial scams.
• Take a quick assessment of driving skills by asking one of your parents to drive you to the store. Note if he or she seems tense or easily distracted behind the wheel, as well as if he or she is wearing his or her seat-belt and obeying traffic laws. This is also an opportunity to check the gas level and dashboard warning lights to see if your parents are properly maintaining their vehicles.
• Check out all of the appliances in the home to make sure they are in good working order. This goes double for smoke detectors, carbon monoxide detectors, and medical alert systems.
• Look around your parents’ home and see if their standard of living seems to have changed. If you find clutter and cobwebs in what was once a spotlessly clean home, it could be a sign of depression or the onset of physical limitations.
• Ask your parent if he or she continues to attend social activities that he or she used to enjoy. Limiting activities may be a sign of depression or the beginnings of cognitive impairment.
If you find that your parent is having difficulty managing at home without help, start the conversation by contracting with An Aging Life Care Professional, also known as a geriatric care manager, who can act as a guide and advocate for families who are caring for older relatives or disabled adults.

The old man slept quietly as his daughter sat by his hospital bed. Suddenly, an aide walked in and announced that a move was imminent.

“Your time here is up,” Bonnie Miller Rubin remembers the aide explaining. “He’s going to a nursing home.”

It was 9 p.m., and Rubin’s 91-year-old father had been asleep for several hours. “I said, ‘Are you kidding me?’” Rubin recalled.

“I felt powerless,” she said, remembering her alarm on that cold night three years ago. “What rights did I have?”

In fact, Rubin could have filed a “fast appeal” of her father’s pending discharge with a Medicare Quality Improvement Organization. If she’d made a telephone call on the spot, her father would have stayed in the hospital until an independent physician reviewed his circumstances.

Every older adult admitted to a hospital as an inpatient has the right to challenge a discharge if he or she feels unprepared to leave. But few people understand the process that’s involved.

Frequently, seniors and their families are caught by surprise when a transfer from the hospital is at hand.

After a lawsuit charging that Medicare was not giving beneficiaries adequate notice of the right to appeal pending discharges, the government issued new regulations on the process a decade ago. Here’s how so-called “fast appeals” are supposed to work:

Know your rights. Every older adult admitted to the hospital should get a written notice of their rights — including the right to appeal planned discharges — within two days. If you remain in the hospital for at least five days, you should receive a second notice before being discharged.

This “Important Message from Medicare” will give you the name and a phone number for your Medicare Quality Improvement Organization (QIO) — an entity charged with handling fast appeals as well as other matters, such as complaints about the quality of care.

QIOs serve older adults on traditional Medicare as well as seniors with managed care-style Medicare Advantage plans. Livanta is the QIO for seniors with Medicare who live in the Northeast and the West Coast. KEPRO covers the rest of the country.

Rubin doesn’t remember receiving these notices from Evanston Hospital, just outside Chicago, where her father was being treated for respiratory distress. But Jim Anthony, a hospital spokesman, said the medical center always distributes them, as required.

The medical center began planning the older man’s transition to a nursing home on “the day of admission, with the family’s knowledge,” Anthony explained.

The bottom line: Read all the documents that you’re handed in the hospital. Don’t assume you can put off doing so until later.

Initiating an appeal. If you don’t feel ready to leave the hospital, call the QIO and explain that you’re filing a fast appeal of a pending discharge. You can call during the day or at night up until just before midnight on the day that the discharge was set to occur.

If someone’s not manning the phones — QIOs are open 9 a.m. to 5 p.m. during the work week and 11 a.m. to 3 p.m. on weekends and holidays — leave a message explaining your situation.

A family member or caregiver can initiate the process if a patient is unable to do so. But they may subsequently need to fill out a form clarifying that they can act as the patient’s representative.

Only seniors admitted to the hospital qualify for this appeals process. Patients on “observation status” have a separate appeals process. So make sure you clarify your status often, this might not be clear.

Hold tight. Once a fast appeal has been lodged, you can’t be transferred from the hospital until its resolution. Usually, that takes about two days.

Nor can you be charged for the extra time you spend in the hospital, though coinsurance payments and deductibles will still apply.

The hospital will send a copy of your records to the QIO, to be examined by an independent medical reviewer. You have a right to see these documents, if you so choose. The QIO will contact you and inquire about your discharge concerns.

The standard? Medical care in the hospital must be deemed medically necessary by your physician.

If you’ve stabilized, without symptoms such as a fever, difficulty breathing, or a purulent wound, you’ll probably be considered ready for transfer, said Anne Sansevero, a registered nurse and aging life care specialist in New York City.

Stay informed. It’s a good idea to ask your doctor every day “Is there any update on how long I’m likely to be here?” so you don’t find yourself “in a last minute situation,” said Liz Barlowe, a care manager from Seminole, Fla.

If the hospital hasn’t adequately addressed your need for a “safe discharge,” you may have grounds to contest its decision.

Barlowe described a 78-year-old client who fell and broke her hip when visiting her son and daughter. Preparing for surgery, scans showed that the woman had masses in her uterus and pelvis — cancer.

After hip surgery, hospital staff said they couldn’t bring in a gynecologic oncologist to consult on the older woman’s case, and recommended that she be sent to a rehabilitation center.

Barlowe immediately contacted KEPRO, which overturned the hospital’s decision. Instead, the QIO’s medical reviewer directed that the patient stay there until a cancer specialist provided a consultation and helped to devise a plan of care.

The QIO’s intervention bought the family another 48 hours, during which time they were able to find a facility in Miami able to offer chemotherapy as well as rehabilitation for the woman’s hip. And the patient was able to rest and build up her strength.

KHN’s coverage related to aging & improving care of older adults is supported by The John A. Hartford Foundation.

In 2011, President Obama proclaimed November as National Family Caregivers month to “pay tribute to the individuals throughout America who ensure the health and well-being of their relatives and loved ones.”  The proclamation honors “the tireless compassion of Americans who heal, comfort, and support our injured, our elders, and people with disabilities.  This month and throughout the year, let the quiet perseverance of our family caregivers remind us of the decency and kindness to which we can all aspire.”

As a society, it’s easy to pay lip-service to the folks in the trenches of caregiving.  Why wouldn’t the nation honor the 40 million family caregivers in the U.S. who, in 2013, provided an estimated 37 billion hours of assistance to an adult with activities of daily living?  According to the AARP, the estimated economic value of their unpaid contributions was approximately $470 billion in 2013.

But even the words “tireless” and “quiet perseverance” connote martyrdom, sacrifice and isolation. These attributes don’t always make the best caregivers and they devalue the all-important first rule of caregiving, which is to ask for help.  This year’s theme is, Take Care to Give Care, acknowledging the fact that caregiving, while rewarding, is physically and emotionally demanding.  By virtue of a caregiver’s role, the caregiver is at a higher risk of health issues.

Caregivers, celebrate yourself this month by recognizing the need to Take Care to Give Care, in whatever way makes sense to you.  In the words of a fellow caregiver, “I’ve become very good at asking for help, in putting necessity first and pride last.”  Successful caregiving takes a team.  Know your capabilities.  Spend time putting a network of support in place, to have people you can call on in an emergency.  People around you likely want to help, but they need to be told specifically what type of help you need and when you need it.

Some additional reminders from the Caregiver Action Network: 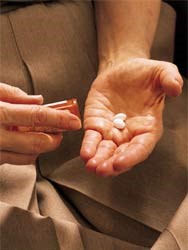 Older people are not only taking more drugs, they are also taking more over the counter preparations.

Many over the counter supplements touted to improve health are in fact dangerous when mixed with some medications.

In a study published in the Journal of Internal Medicine, two- thirds of older adults were using dietary supplements which included vitamins and herbs.

Some of these products, even those that sound natural, may interact with medications.

In fact, a study of interactions in 2010 found that 15% of the individuals had a major drug reaction.

Some of the more common include:

It is important to remember that the best way to reduce a possible drug interaction is to cross check your medication and supplements with a local pharmacy.  They have the ability to run the profile through a computer system for a medication interaction check.